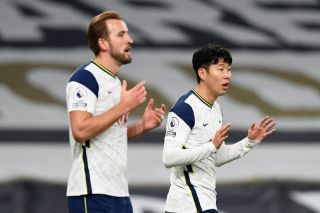 Tottenham Hotspur duo Harry Kane and Son Heung-min are on the brink of breaking the Premier League’s record for combined goals which is currently held by Alan Shearer and Chris Sutton (13) from the 1994-95 season. The Spurs attacking duo’s latest combination against Crystal Palace during Sunday afternoon’s Premier League sees the pair currently on 12.

Kane, 27 and Son, 28, are quickly emerging as one of England’s most prolific strike forces after already being directly involved in a whopping 46 goals combined, in all competitions, so far this season.

The pair who have played together since Son’s arrival back in 2015 have grown to seamlessly know each other’s playing style inside out.

Under the guidance of Jose Mourinho, the attacking duo look all but certain to break Shearer and Sutton’s long-standing record.

Another combination resulting in a goal will see the Spurs pair equal the 15-year old record with one more after that ensuring it’s broken.

It’s worth noting as well – The new 2020-21 campaign is still just 11 (and a bit) Premier League games old; with over 25 league games still to go, Kane and Son’s impending record breaking heroics are just a case of ‘when’, not ‘if’.

12 – Harry Kane and Son Heung-Min have now combined for 12 goals in the Premier League this season – only Alan Shearer and Chris Sutton in 1994-95 have linked up for more in a single season (13). Unstoppable. pic.twitter.com/xrCdarXMOj