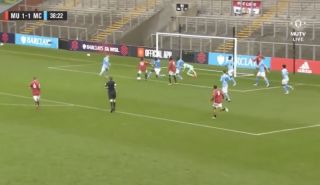 Manchester United new-boy Facundo Pellistri is continuing in his rich vein of form after the South American youngster has put his side’s under-23s into the lead against arch-rivals Manchester City.

Pellistri, 18, joined United earlier in the summer from Uruguayan side CA Penarol, the transfer was confirmed on the club’s official website.

Since his arrival in Manchester, the exciting teenager has been setting the youth leagues alight with his latest contribution coming in Sunday’s tense Manchester derby.

Pellistri’s goal gave the Reds 2-1 lead against 10-man Man City, however, the young Citizens have just pulled one back to make it 2-2 with around half-hour still to go.

Some nice work down the right-hand side before Facundo Pellistri puts United into the lead ? pic.twitter.com/TNp20XQYTl