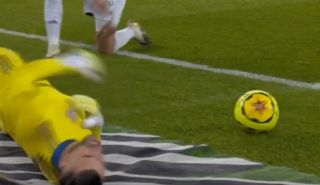 It would be fair to suggest that Neymar is a player who gets involved in his fair share of play acting, but even he is mystified at what he’s just seen against Lyon.

He’s chasing a loose ball down and ends up forcing a defender back into the goalkeeper – it’s probably a foul, but even after multiple viewings it’s still tough to figure out what made the keeper rotate this many times on the floor:

Neymar was also booked for his troubles here, but the keeper needs to be having a word with himself after this.