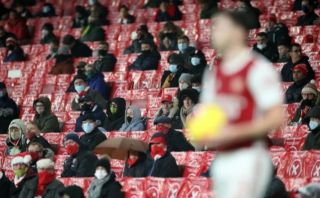 Arsenal fans reportedly made a point of chanting about Mesut Ozil at last night’s 1-0 home defeat to Burnley.

This song seemed clearly aimed at beleaguered manager Mikel Arteta, according to The Athletic, with the Spanish tactician looking like making a big mistake by leaving Ozil out of his squad this season.

The Gunners have been dreadful so far this term, and their defeat last night made it four home league losses in a row – their worst run in 61 years.

One imagines Ozil could have made some impact in this side, even if the German playmaker has not been at his best for some time now and has often had his critics in his time at the Emirates Stadium.

Mesut Ozil has fallen out of favour at Arsenal

Arteta’s Arsenal, however, are badly lacking in creativity and it’s hard to imagine that even an over-the-hill Ozil couldn’t provide some spark to this team.

Something has to change at Arsenal, and it seems the fans have offered their struggling manager some ideas.