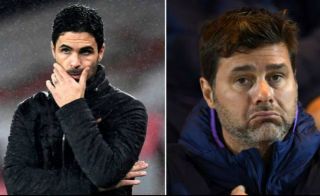 Arsenal manager Mikel Arteta is now odds-on to be sacked before the end of the season, according to Ladbrokes.

The bookmakers also offer odds of just 3/1 to that Arteta could be sent packing by the Gunners before Christmas after yesterday’s shocking 1-0 defeat at home to Burnley.

MORE: Arsenal’s relegation odds drastically shorten as they’re given the same chance of going down as Man United have of winning the title

That result made it four home defeats in a row for Arsenal – their worst run since 1959!

You surely couldn’t blame Arsenal for thinking about making a change at this point, with Arteta’s side playing some dire football as they struggle in front of goal this season.

The inexperienced Spanish tactician started brightly at the Emirates Stadium last season, leading the team to a surprise FA Cup final victory back in August.

Now, however, Arsenal are closer to relegation than to the top four, and it’s unsurprising that Arteta is 8/11 to lose his job at any point this season.

Ladbrokes also have Mauricio Pochettino priced as a potential replacement, though the former Tottenham boss seems to be considered an outsider for the job, with odds of 16/1 that he replaces Arteta.

Alex Apati of Ladbrokes said: “Pochettino is no stranger to North London and there’s an outside chance he makes the most controversial managerial move in Premier League history.”

He added: “It looks like it could soon be curtains for Arteta, with Arsenal struggling to get going this season he seems almost certain to pay the price.”

Mauricio Pochettino to be next Arsenal manager – 16/1

Mikel Arteta to be sacked before Christmas – 3/1