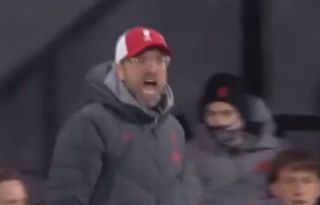 Liverpool manager Jurgen Klopp has been spotted absolutely losing it at his players during the draw with Fulham.

MORE: Premier League team of the week: Liverpool star the only big six player to make it in

Picture of courtesy of Sky Sports

Liverpool fought back from 1-0 down to claim a 1-1 draw, but it was far from a vintage performance from the Premier League champions.

Klopp has set high standards at Anfield and it’s clear he wants a lot more from this side after they dropped points at Fulham.