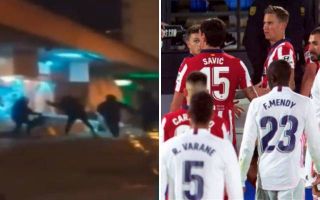 According to deporteson.com, the thugs filmed destroying a bar in Madrid were Los Blancos Ultras attacking Atletico supporters watching the derby.

The Madrid derby took place on Saturday, with Real Madrid coming out on top. You’d have thought their fans would have been glued to the screen for a game of that magnitude, but apparently not.

deporteson.com report that a group of Real Madrid ultras allegedly destroyed ‘La Exagerá’ bar where Atletico supporters had gathered to watch the big game. The police are now searching for the suspects.

We’re all for football rivalries and the edge it brings to the game, but allegedly destroying an establishment which has presumably suffered greatly as a result of the pandemic is a disgrace.

Those implicated need to be identified and prosecuted in due course, with the owner of the bar adequately compensated for the damage done to his property.

Thankfully, deporteson.com report that there were no injuries sustained as a result of the attack, which is a welcome result that we can appreciate.