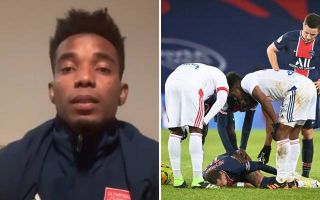 Lyon’s Thiago Mendes took to Instagram to apologise to Neymar after his shocking tackle left the Brazilian on a stretcher on Sunday evening.

PSG fans, and the football world as a whole, feared the worst as Neymar left the field on a stretcher yesterday evening, with Mendes’ terrible scissor challenge leaving the Brazilian on the turf.

Neymar appeared to be in tears as he was taken from the field on a stretcher after suffering an injury in Paris Saint-Germain’s 1-0 loss to Lyon on Sunday.

Especially with PSG having drawn Barcelona in the Champions League this afternoon, it would have been a dear shame if Neymar was not available to compete against his former employers.

However, as Mohamed Bouhafsi reported on Twitter, the injury is not as serious as first feared and there’s hope Neymar will be available to return within two weeks.

One man who will be as relieved as Neymar is Thiago Mendes, whose actions were what resulted in the damage done to Neymar’s injury. While it was a shocker, he does appear to feel a great deal of remorse.

Mendes took to Instagram to apologise to the PSG superstar. His comments translate as (via Globoesporte): “Like the Brazilian people, I also admire his football and I hope that nothing serious has happened. May he recover quickly and bring joy to the fan. Here again is my sincere apologies”