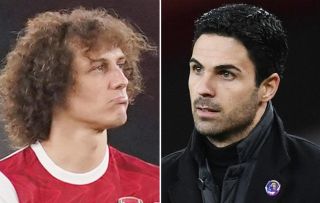 David Luiz’s camp have denied any rumours of a bust-up between himself and Arsenal manager Mikel Arteta, with the club also issuing a statement denying the claims.

It’s been a nightmare season for Arsenal so far, with the Gunners currently closer to the relegation zone than the top four after already losing seven Premier League games, including all of their last four at the Emirates Stadium.

To make things worse, football.london reported on the sour mood behind the scenes at Arsenal, claiming that Brazilian defender Luiz was no longer on speaking terms with manager Arteta.

However, these claims have now been denied by both Luiz and Arsenal, which perhaps suggests things are not as bad as they seem, though of course the club would no doubt prefer to give that impression than any other.

A representative of Luiz said, as quoted by the Metro: “David Luiz strongly denies this story about him and Arteta and insists he has a good relationship with Arteta and wishes nothing but success.”

The report also quotes a statement from Arsenal as saying: “Arsenal have denied that there has been any issue between Mikel Arteta and David Luiz.”

It remains to be seen if this will do much to comfort Arsenal fans after this rough campaign so far.