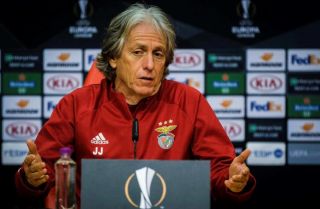 Arsene Wenger didn’t manage to take Arsenal all the way in the Champions League during his team, but they were certainly a feared opponent.

They reached the final against Barcelona and still took the lead despite Jens Lehmann taking an early red card, while there were other impressive scalps over the years.

Even in recent times they still provided a formidable opponent in the Europa League after reaching the final under Unai Emery, but it looks like that aura has completely worn off due to their recent troubles.

They’ve drawn Benfica in the next round of the Europa League in a tasty looking tie, but it doesn’t sound like Jorge Jesus is overly concerned about his opponent.

READ MORE: Arsenal look set to miss out on controversial signing as star sees the move as a backwards step

A report from O Jogo carried some of his comments about the game, and he basically says he will respect them but he’s not losing any sleep and he’s confident that his team can progress.

It’s a worrying one for Mikel Arteta because we’ve seen with Man United what can happen as soon as the spell breaks and teams don’t fear them anymore, and it looks like a similar thing is happening in a more extreme way with Arsenal.

It’s reached a point where you just expect them to drop points every time they step onto the field just now, so they’ll be hoping they improve in the next few weeks and actually give Benfica something to be scared of.