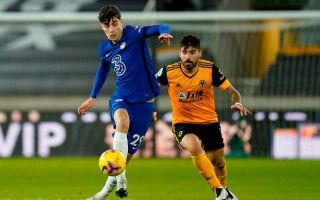 Kai Havertz has been absolutely savaged by these fans on Twitter after another poor performance for Chelsea during their 2-1 defeat to Wolves this evening.

Havertz signed for the Blues from Bayer Leverkusen in what the BBC reported to be a £71M deal. The German was, at the time, considered one of the hottest prospects in the Bundesliga, perhaps the world, but has shown little at Stamford Bridge to suggest he has that potential within him.

MORE: Video: Neto bounces back from VAR penalty review to win it for Wolves vs Chelsea with an outstanding finish

The midfielder has continually struggled to have any sort of influence on matches, with his form drastically nose-diving further since his return from coronavirus quarantine. As a result, fans on Twitter are taking turns having digs at Havertz, who is still only 20-years-old.

Here’s what some football fans on Twitter had to say on the matter. Having played a part in back-to-back defeats for Chelsea, Havertz could probably do without scrolling through his Twitter feed tonight. It won’t make for particularly pleasant reading for him.

Havertz In Bundesliga VS Havertz In The Premier League #WOLCHE pic.twitter.com/Kfdn41i3Ug

Kai Havertz is a bigger flop than Pepe.

Kai Havertz is the biggest waste of doe since Di Maria