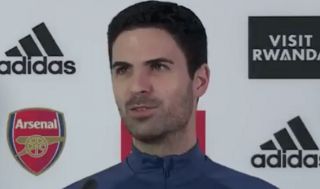 Say what you like about Mikel Arteta, but the straight talking Arsenal manager appears to be made of the right stuff.

Results on the pitch may not reflect his work ethic which remains a concern, however, the Spaniard has bullishly approached questions about his suitability in the role.

During his recent press conference he spoke about not hiding away, showing your face, puffing out your chest and taking the bullets.

He clearly understands the situation his team are in but remains steadfast in his belief that he’s the right man to lead the Gunners out of the mire.

“This is the reality and we have to face it”

Mikel Arteta admits he will ‘take the bullets’ during Arsenal’s tough time but vows to turn things around pic.twitter.com/TLfGSh60Q5