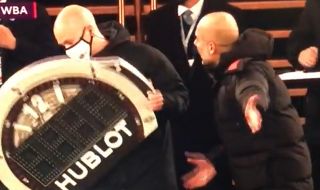 Ole Gunnar Solskjaer has taking a pounding this season for several poor performances and not taking the club forward, but it’s absolutely worth noting that Man City are now on the same amount of points and they’ve played a game more.

Their draw tonight against West Brom didn’t go down well with Pep as his team had so many chances to win, but they couldn’t find the crucial goal and the strugglers escaped with a point.

It’s underrated as to how much nonsense the fourth officials have to put up with as managers moan at them throughout the game for every little decision, but this ranting and raving is next level stuff from Pep:

Pep Guardiola was not happy with the amount of injury time ? pic.twitter.com/7K5ci9wUoR

The best thing about this is the fourth official has clearly had enough of him at this point and does a pretty good job of throwing in the occasional nod to keep Pep going but he’s clearly not listening, while Pep’s reaction when he realises is funny to see.