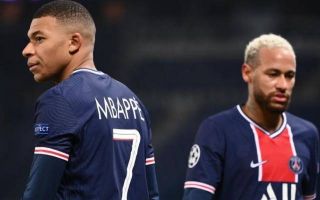 Admittedly it’s hard to feel too sorry for Barcelona fans just now when you consider they’ve enjoyed beautiful football and relentless success for over a decade, but it does look like they can’t do anything right.

The loss to Juventus pushed them into second spot in the Champions League group which ensured they wouldn’t be seeded for the next round, so the draw against PSG is the last thing they needed.

It’s likely they’ll take a severe beating and Neymar will run them ragged, but there is always the hope that they might somehow conjure up a great performance to see them through.

There’s no doubt that it would be some achievement if Koeman can get this squad to defeat PSG, but a report from AS has detailed how it could actually hurt them for years to come.

READ MORE: Man City and PSG forced to wait as Messi won’t make up his mind on whether to leave Barcelona until after elections

Essentially Kylian Mbappe only wants to stay at PSG if they are successful in the Champions League, so it’s believed that a loss to Barcelona will be the final straw that leads to him forcing a move to Real Madrid.

Mbappe’s contract is up in the summer of 2022 so he has plenty of leverage here, and this whole situation would sum Barca up just now – just when they think they’re making progress, they somehow make everything so much harder.

Real Madrid are already better than Barca so if this summer sees Messi leave while Mbappe arrives in Madrid then it might be safe to suggest the La Liga title won’t be returning to the Nou Camp for a few years.