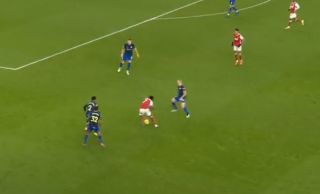 It was starting to feel like we would need to seriously consider Arsenal as contenders for relegation this season if they lost tonight, so they’ll be hoping this goal from Aubameyang can kick start their season again.

It owes everything to some skill and strong running from Bukayo Saka in the build-up, while even an out of form striker lacking in confidence was never going to pass this chance up:

AUBAMEYANG GETS HIS GOAL!

There’s still a long way to go in the game so Arsenal need to be careful, but they desperately needed something positive and this goal is just what they were looking for.