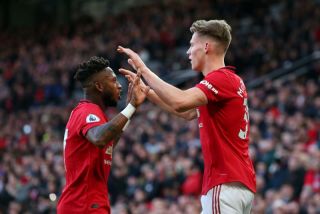 Manchester United midfielder Fred has admitted that he is eyeing the illustrious Premier League title and has reassured fans that the squad remains focused on reaching the top of the table.

Fred, 27, joined United in 2018 from Shakhtar Donetsk in a move which cost the Reds’ hierarchy a whopping £53.1m, as per Transfermarkt.

Since Fred joined United, the Brazilian has featured in 88 games in all competitions with arguably his best of form coming during the new 2020-21 campaign.

The 27-year-old has put in a string of fine performances which has seen him quickly emerge not only as a fan-favourite, but also as one of Ole Gunnar Solskjaer’s most trusted midfielders.

Fred, who primarily operates as an industrious box-to-box midfielder has formed a notable partnership with Scott McTominay as the pair continue to bring out the best in one another.

“The key to coming back and winning is our concentration in every game, going on to the pitch to do our best and be decisive and to believe,” Fred said, as quoted by MEN. “Our team have done this in some games this season, we’ve had some great performances, so we must aim for this consistency, to continue having great games and to go very far with a run of great performances.

“We’re very close to the top of the table and we’ve got some big games coming up in December.

“If we can win all of them, we’ll be very close to the leaders at the top of the league or we could even take first place. So we’ll look to win every game and I’m certain our team will do everything to reach the top of the table and stay there.”

United currently sit ninth in the league table on 20-points but do have two games in-hand over league leaders Liverpool who are on 28-points.

Ole Gunnar Solskjaer is currently preparing his side to compete in five domestic matches before January 2 during a period which could decide whether or not United are genuine title challengers.

Can United win the Premier League title for the first time since Sir Alex Ferguson retired? – Let us know in the comments.