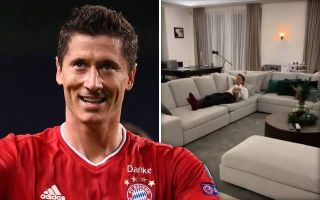 Robert Lewandowski got the ultimate reward for all his hard work last night – which gave him an opportunity to finally put his feet up.

Lewandowski has been far and away the best player on the planet over the past calendar year, a fact that’s clearly supported by his fellow professionals, with the Bayern Munich superstar winning the The Best FIFA Men’s Player award yesterday evening, edging Lionel Messi and Cristiano Ronaldo.

Beating two of the best players of all-time to top the podium is quite the feat and one that Lewandowski will no doubt consider to be one of the greatest achievements in his career to date.

It goes to show that hard work and continual graft over such an extended period of time pays dividends, and now it’s time for Lewandowski to put his feet up and enjoy his success, as he did so after last night’s ceremony was complete. Have a look at this video shared by FC Bayern on Twitter.