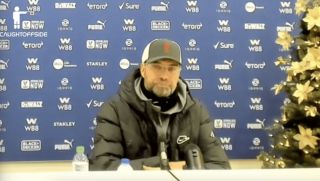 Some might call it a winners mentality and the reason why Liverpool find themselves at the top of the Premier League table at Christmas for the third season running.

Asked during his post-match press conference how satisfied he must be after watching the Reds thump Crystal Palace 7-0, Jurgen Klopp was deadpan when he noted that he didn’t feel any satisfaction.

The German was more interested in the amount of rest his players will now get after playing relentlessly twice a week for the last couple of months.