This graphic of Arsenal’s form over their last ten Premier League games won’t make for fond viewing for Gunners fans – or Man United fans, for that matter.

Mikel Arteta’s men’s defeat to Everton at Goodison Park this evening was just the latest in a string of disappointing performances and results under his stewardship.

Arsenal have found themselves in a situation where they are genuinely looking over their shoulder at the relegation zone, through fear of being dragged into a survival fight.

MORE: Video: Nicolas Pepe’s reaction after scoring ought to offer Arsenal fans some degree of encouragement

It’s easy to see why they find themselves in this situation, too. Look at their recent form, over the course of the last 10 PL games – that is absolutely shocking. 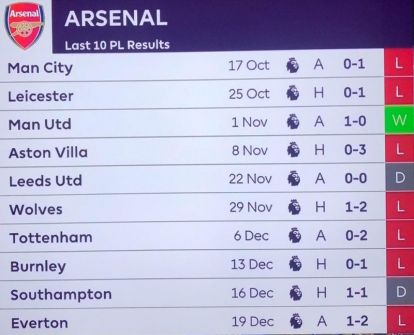 While Arsenal fans will find that a tough read, so will Manchester United supporters, no doubt. Their only victory since mid-October has come against them, and at Old Trafford, too.

Arteta may well face the sack if the results keep going against them, but considering how bad Arsenal have been of late, losing to them might be a sackable offence committed by Ole Gunnar Solskjaer, also.