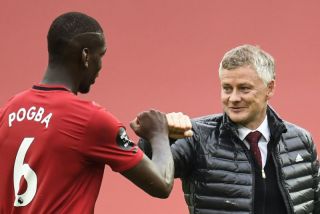 Manchester United manager Ole Gunnar Solskjaer has opened up on the current situation and his relationship with midfield star Paul Pogba.

Pogba, 27, rejoined United from Juventus back in 2016, four-years after departing the Reds’ youth academy in-favour of a move to Serie A.

Since the French midfielder teamed back up with the United coaching staff he has gone on to feature in 180 matches in all competitions, netting 34 times and assisting another 35 along the way.

Despite costing the Reds’ hierarchy a whopping £94.5m (Transfermarkt), the French World Cup winner has endured patches of inconsistency which have been the catalyst behind fans’ criticism.

Pogba’s situation at United continues to split opinions and in light of a summer of speculation, the rumour mill has been turned up a notch.

The latest in the ongoing saga came directly from the midfielder himself who recently shut down rumours suggesting he could be looking to move on in January.

The 27-year-old took to his social media to address speculation sending fans the following message: “I’ve always fought and will always fight for @manchesterunited , my teammates and the fans. Bla bla is not important. The future is far, today is what matters and I am 1000% involved! Always strong together.. all has been clear between the club and myself and that will never change. When you don’t know what’s going on inside don’t talk.”

In light of Pogba’s stunning public declaration of commitment, the playmaker has gone on to enjoy a short rich vein of form.

After featuring in his side’s last three domestic matches, including scoring a brilliant long-range goal against West Ham United, speculation surrounding where Pogba’s long-term future lies continues to be speculated.

Ahead of his side’s mouth-watering match-up against bitter rivals Leeds United on Sunday, Solskjaer has addressed the noise surrounding his star midfielder.

“Paul [Pogba], he wants to play, he wants to train, he enjoys football, he wants success, he’s ambitious, so when he’s on the pitch and on the training field I see a boy who enjoys his football,” Solskjaer told Sky Sports. “That’s what I care about. What we talk about, him and me, we know what we’ve discussed.

“I think fitness and confidence goes a little bit hand in hand, because when you’ve got the quality that he has, of course fitness is a foundation of your confidence, because you know your ability will get a performance.

“He’s had a difficult year last year with loads of injuries, about nine or 10 months he was out. Then he got Covid, at the start of the season he didn’t feel fit, so then what comes first… Do you play him to get him fit? Or rest him so then he won’t get playing time?

“Now he’s responded to the work we’ve done and you see the good performance. He’s a player who can do most of the things, he’s got all the attributes. I’m delighted with his performances.”