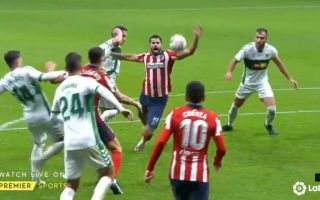 Diego Costa has reached his ultimate form against Elche this afternoon, having dived to win a penalty and it being upheld by VAR.

Costa is renown as one of the biggest troublemakers in the game. When it comes to head-butting, stamping and furiously mouthing off – he’s your man.

He’s best known for his antics in the Premier League with Chelsea, with it being the most watched league in the world, but that doesn’t mean he’s been any better behaved in Spain.

Take this incident from today for example, with Costa quite clearly throwing himself to ground under challenge from the Elche defender in the box. It’s as blatant a dive as you’ll ever see.

A puzzling decision at the Wanda Metropolitano ?

Diego Costa with a clear dive but the penalty decision is upheld by VAR and Atleti lead 3-1 after the striker converted it ? pic.twitter.com/zbpNttD6vy

What you might be surprised to hear is that VAR didn’t actually overturn the referee’s initial decision to point to the spot. The penalty was awarded, with Costa himself converting.

You can only imagine that, with the defender making slight contact with Costa, perhaps on the hand, they’ve ruled it as a foul, even if not as serious as his reaction suggested.

Though, what they’ve essentially done here is rewarded Costa for throwing himself to the floor, which doesn’t really send the right message, does it?