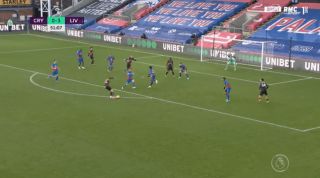 No sooner had the second half begun at Selhurst Park, than Liverpool were back in the groove against Crystal Palace.

The south Londoners had no answer to Liverpool’s expansive attacking play which was coming at them from both wings and centrally.

After being pulled across to the left-hand side of the pitch, Palace’s defence had left Trent Alexander-Arnold all alone on the right.

The youngster had time to tee up captain, Jordan Henderson, and his curled finish was just sumptuous.