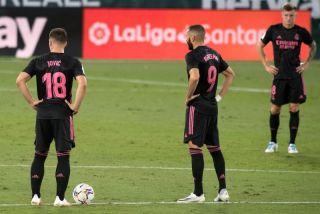 Jovic, 22, joined Real Madrid from Eintracht Frankfurt in 2019 in a deal worth a whopping £56.7m, as per Transfermarkt.

Despite the Serbian’s hefty price-tag, Jovic has struggled to live up to expectations during his first 18-months with Los Blancos.

Jovic has featured in 32 matches in all competitions for Real Madrid has only managed to net twice; a huge shift in form since his prolific spell in Germany.

After making just four appearances in La Liga so far this season, Jovic’s long-term future continues to be speculated.

According to a recent report from Spanish outlet AS, the 22-year-old striker has emerged as a January target for Serie A leaders AC Milan.

AS claim that AC Milan are initially looking to offer Real Madrid a six-month loan with an option to buy; a proposal Jovic is rumoured to want.

It has been reported that Jovic ‘loves’ Italian football and would welcome a new adventure in the Serie A in an attempt to resurrect his stagnating career.

AC Milan fans – Is this a signing you’d like to see? – Let us know in the comments.