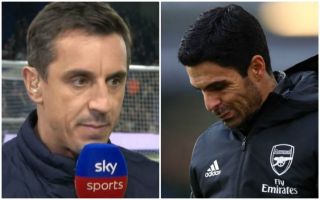 Another Arsenal reverse at the weekend leaves the Gunners well down in the Premier League pecking order and hands Mikel Arteta a continuing conundrum as to how he gets his players out of the funk that they find themselves in.

The Spaniard has taken the brunt of supporter ire, but pundits are now beginning to question his modus operandi too.

Gary Neville has even gone as far as to label the north Londoners boring.

“The Mikel Arteta team looks more rigid, more solid but it’s a bit boring and they’ve got to get that out. You can’t bore,” he said on the Gary Neville podcast, cited by the Daily Mirror.

“I used to say that here [at Manchester United]. You can win, you can lose, you can’t be bored coming to Old Trafford.

“And to me the Arsenal players at this moment in time look a little bored and the football they are producing looks like a real struggle.”

If the Gunners were getting the results, boring or otherwise, the Arsenal faithful would surely be happy.

The fact that they’re not winning games but are looking tired and flat in most of the games they’re playing has to be a worry for Arteta.

Although the expectation is that the board will stick with their former player for some while I any event, clearly the status quo needs to change and, as Neville alludes to, a more attacking style of play wouldn’t go amiss either.