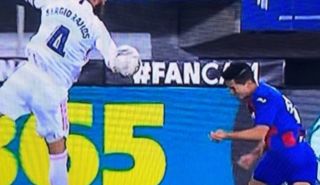 There’s an ongoing debate about VAR and whether is favours Real Madrid or Barcelona, but it’s very possible that fans of the other eighteen clubs will point out that it’s heavily weighted in favour of both of them.

The handball law has received a lot of attention this season as anything that hits an arm has the potential to be called a penalty, so this was a nervous moment for Sergio Ramos last night:

Should a penalty have been given against Ramos for handball? ?

It does hit his elbow so immediately it becomes a judgement call for the referee to make – you can make arguments both ways, so we need to trust the ref’s judgement in this case and VAR can’t really get involved if it’s not a blatant error.

A report form MARCA carried some comments from Barcelona boss Ronald Koeman about the call, and he’s getting quite close to overstepping the mark here:

“I do not understand the VAR criteria. I said it [after] the Madrid match, there are things that cannot be understood.

“If you ask 10 people if yesterday’s [incident] was a penalty, nine say yes. But the referee decided not to whistle. We already know…”

A manager just cannot call the referee’s integrity or competence into question without some action being taken against them, but he’s probably held back just enough to avoid any consequences for these words.