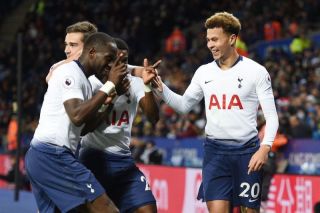 Tottenham Hotspur midfielder Dele Alli is reportedly close to leaving the London based club amid speculation the Englishman could be set for a January exit.

Dele, 24, joined Spurs from MK Dons back in 2015 and has since gone on to feature in 232 games in all competitions.

Despite a largely successful spell with Spurs, Dele has since found himself fall out-of-favour with current manager Jose Mourinho.

Since taking over from Mauricio Pochettino 12-months ago, Mourinho has opted to include Dele in his first-team plans less and less.

After failing to be included in Mourinho’s match-day squad to face Leicester City on the weekend, despite the Premier League allowing up to nine substitutes, there is now intense speculation that Dele’s time in London is set to end.

According to a recent report from the Telegraph, chairman Daniel Levy turned down three loan offers from Ligue 1 side Paris-Saint Germain during the summer transfer window.

It has been claimed that although it is not yet known whether or not Paris-Saint Germain will reignite their interest in Dele during the January transfer window, Levy would prefer for the 24-year-old to move abroad.

The Guardian claim that despite Spurs hierarchy’s willingness to allow Dele to depart in January, this has yet to be confirmed to the English midfielder himself.

It has been reported that Dele is now faced with waiting to find out if he will be included in Mourinho’s match-day squad to face Stoke City in Wednesday’s EFL Cup tie.