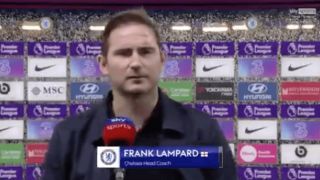 Frank Lampard wasn’t in the mood to argue with those who had questioned his team selection for the West Ham game.

The Chelsea manager appeared to have placed Timo Werner out on the wing again for the visit of the Hammers, and this prompted a flurry of social media messages questioning Lampard’s wisdom.

In his pre-match interview he made it quite clear who was calling the shots and appeared to be in bullish mood ahead of the game.

“I’ve got choices to make…Tammy gives us energy from the front.”