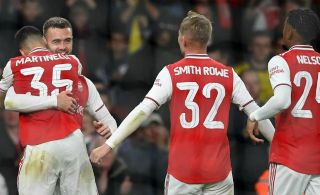 It’s natural for any fan to demand the young players get a chance when the veterans just aren’t performing, but there must be a reason that so many managers just refuse to do it.

It probably comes down to them becoming paranoid about their own future and knowing they can “trust” the older players, but there’s a case to be made that Arsenal’s young talents need to be starting more games.

We usually see that the young players play without fear and they have the energy and ambition to do something different, while being an unknown quantity also helps.

Too many teams are drilled to do the same things so they become predictable, while having someone who does different things or hasn’t learned to be so disciplined can actually work in your favour if it’s in an attacking sense.

READ MORE: “Arteta has to go” – These Arsenal fans are baffled by selection choice that ruined Arsenal’s chances vs Man City

There are two sides to this and it could legitimately traumatise some of the kids for the rest of their careers if they somehow get dragged down with Arsenal, but the likes of Gabriel Martinelli and Emile Smith-Rowe showed more tonight than many of their big money colleagues.

There’s not much for the Arsenal fans to get excited about now, but the younger players do offer some hope for the future and plenty of the supporters are demanding they get the chances to start in the Premier League:

Smith Rowe should play more in the Prem. A couple of times he had that half turn and played a good ball forward. We need that type of player in behind the strikers. Gabi looked great just hope he’s not injured long term again.

Balogun, Smith-Rowe and Martinelli start from now on!!

I don’t want to see them benched for certain players ever again.

Honestly, Emile Smith Rowe should start vs Chelsea. No way should we persist with Willian.