According to WhoScored, the best team in Europe’s top five leagues so far this season has been… Aston Villa.

No – not Bayern Munich, PSG, Barcelona or Liverpool, it’s Villa, who currently sit ninth in the Premier League.

WhoScored’s brainboxes crunch the numbers to produce average performance ratings for both players and teams as a collective, and in terms of average rating across all league games played so far this term, Aston Villa come up trumps.

MORE: Neville and Carragher pick their Premier League team of 2020 – and there’s no Sadio Mane 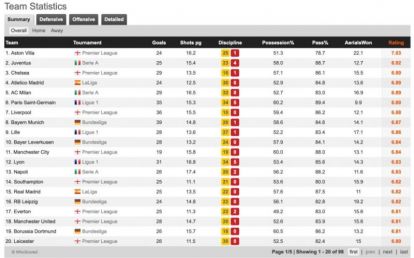 Dean Smith’s side have produced some quite superb performances this term, notably during the 7-2 thumping of Liverpool and the 3-0 win at the Emirates. They will also jump to second in the table if they are able to win their two games in hand.

Nonetheless, it’s hugely surprising to see them top of the pile and Liverpool, the Premier League champions and current leaders, in seventh, not even as high as Chelsea, who are fifth in the league.

We’re not entirely sure how WhoScored are calculating these match ratings, and while not understanding the maths behind it we would refrain from criticising – but it is slightly bizarre.