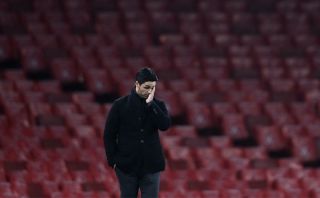 A shocking stat has emerged which suggests that should the Gunners not improve on their current form they could be heading for the Championship.

READ MORE: “Embarrassing and weak” – These Arsenal fans react as the club blocks them from responding on Twitter

After being named as the club’s permanent manager 12-months ago, Mikel Arteta could not have got off to a better start.

The former Gunners and Everton midfielder saw his side lift the 2019-20 FA Cup with the future seemingly very bright under the young manager.

However, fast forward a few months and Arsenal are staring at the unthinkable.

Having won just four of their opening 14 Premier League matches, the London based club now sit in the precarious position of 15th in England’s top-flight.

Adding insult to injury, should Burnley win their game in-hand, Arsenal will sink to 16th, just four-points off the dreaded drop zone.

Whilst some fans may not yet be contemplating the possibility of relegation, a shocking stat has emerged which will surely force them into reconsidering.

According to stat site Stats Perform, the last time Arsenal scored less goals in a season than they’re expected to this time out (33) was during the 1912-13 season (26); a season which saw them relegated.