While 2020 is not yet complete, in terms of the days on the calendar or the football that’s still to be played, it was the final MNF show of what was a forgettable year, thus acted as a closing of a chapter.

Acting as part of that was the below rundown of key stat areas across the entirety of Premier League games played in 2020. For the most part, it’s the usual suspects dominating, with Liverpool and Man City having the most inclusions, as you would probably have expected

MORE: Neville and Carragher pick their Premier League team of 2020 – and there’s no Sadio Mane 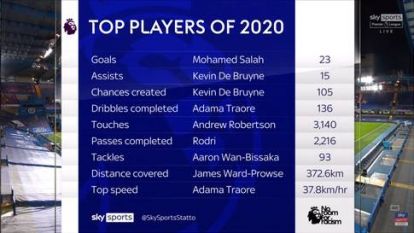 There’s no surprise to see Liverpool’s Mohamed Salah with the most goals scored, nor Man City’s Kevin De Bruyne top of the tree in terms of assists provided and chances created.

Salah’s Liverpol teammate Andy Robertson leads the way with most touches, which would be a surprise to some, considering he’s a full-back, but the Scotsman has involvement in virtually every attack.

Adama Traore, despite losing his place in the Wolves side this season, is where you’d expect him to be, while Rodri has benefited from being continually fielded at the heart of a Pep Guardiola midfield.

Aaron Wan Bissaka stands proud as the Premier League’s top tackler, but you might be surprised to see James Ward-Prowse with the most ground covered.

The Englishman is often praised for his effectiveness on set-pieces, but his hard-work is not something that’s oftentimes highlighted. Hats off to him in that respect!