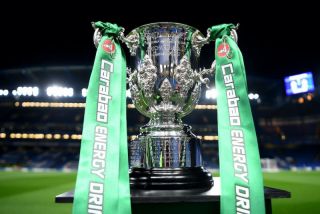 Manchester United manager Ole Gunnar Solskjaer is set to be without Aaron Wan-Bissaka and Sunday’s goalscoring hero Scott McTominay when the Reds face-off against Everton in Wednesday’s Carabao Cup quarter-final.

READ MORE: Spurs tipped to move for top class defender in January as Champions League exit may have reduced his £55m asking price

The news that Solskjaer will be without his first-team duo was confirmed on the club’s official website ManUtd.com.

Both players will arguably be a big loss for the Red Devils who are looking to lift their first major trophy since 2017.

United notoriously lack quality in depth in their right-back position and with first-choice Wan-Bissaka now ruled out through injury, Solskjaer will be forced to turn to the likes of Timothy Fosu-Mensah or Brandon Williams.

Elsewhere, Sunday’s Man of the Match McTominay who bagged a three-minute brace against arch-rivals Leeds United in the Premier League will also miss Wednesday’s cup tie against Everton.

United’s commanding box-to-box midfielder hobbled off late-on during his side’s clash against Leeds United and has now officially been ruled out of the Reds’ next game.

Speaking on the club’s website, here is what Solskjaer had to say: “Those two [Wan-Bissaka and McTominay] will miss the game against Everton definitely.

“Hopefully, it won’t be too long. They’ll be out but, apart from that, I think everyone is, more or less, okay.”

Solskjaer will be hoping both Wan-Bissaka and McTominay are back firing fit for the Red Devils’ important domestic clash against Leicester City on Boxing Day.

A festive win against Brendon Roger’s high-flying Foxes could see the Reds go as high as second in the Premier League table.