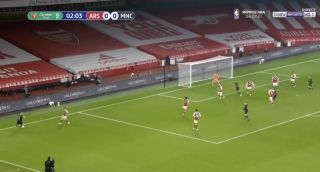 Manchester City striker Gabriel Jesus has piled the pressure on Arsenal manager Mikel Arteta after heading his side into the lead after just two-minutes in Tuesday’s Carabao Cup quarter-final tie.

Arsenal who sit precariously just above the drop zone in the Premier League would have been hoping to inspire a turning around in form in the shape of a deep cup run.

However, after being drawn against City in the Carabao Cup quarter-finals and going behind after just 124 seconds, what looked a tough task now looks like an impossible one.

Brazilian forward Jesus has headed the ball home from close range after getting on the end of a whipped ball in from team-mate Oleksandr Zinchenko.

Questions surely have to be asked over the Gunners’ defending here though.