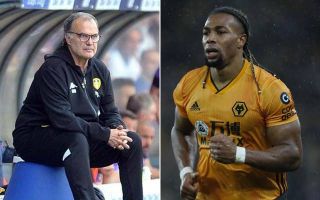 According to 90min, Leeds United are interested in signing Wolves’ Adama Traore. These fans on Twitter have had their say on the speculation.

Traore was one of the best players in the Premier League throughout the second-half of the previous campaign, but has completely gone off the boil this time around.

He has been rotated in and out of the side by manager Nuno Espirito Santo and has struggled to have much of an impact when he has been on the field of play.

90min report that Wolves could be set to cash-in on the speedster, with Premier League counterparts Leeds reportedly interested in securing his signature.

Adama is a popular player among the neutrals – he’s nothing if not entertaining – so it’d be no surprise if there were plenty of Leeds fans who are keen on seeing him signed.

To give you a more comprehensive idea of the feeling at Elland Road, though, here’s how some Leeds fans took to Twitter to react to the Adama speculation.

Adama Traore…… you will start every week for this great club…. you would be loved by the fans ? #leeds #lufc #adama #wolves @LUFC @LewisDeighton17 @Oli_LUFC_1919

Remember when he played vs us for Boro. We couldn’t cope with him. Genuinely up there with one of the best individual performances I’ve seen vs us in the last 3-4 years

I could get on board with this

Leeds are interested in siging Wolves winger Adama Traore, with a fee of £40m said to be required.

Pls let this be a thing! ? https://t.co/CtafpRX5wA

Would I love to see Adama Traore at Leeds, yes. Do I think we are going to make a move for him in January, unfortunately not. #LUFC