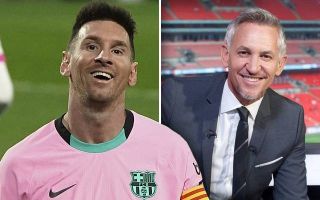 Lionel Messi is a record-breaker, again, with former Barcelona striker Gary Lineker sharing a quite incredible stat about what the Argentine has achieved.

In case you missed it last night, Messi broke one of Pele’s record that you could be forgiven for thinking would never have been beaten.

No one has scored more goals for a single club than Lionel Messi ? pic.twitter.com/99z4m9tJAS

Nobody expected a phenom like Messi to emerge, with the footballing ability comparable to anyone who has ever played the game, Pele included.

Lineker, who wasn’t bad himself, though nowhere near that bracket, has helped put Messi’s achievement into context with this quite insane stat.

To beat Messi’s 644 goal record, someone will have to score an average of 43 goals a season for 15 years….for one club. ?

The big question will be around how many more Messi will add to that tally, whether he will take it up to 700 and beyond, or depart Barcelona for pastures green.

Either way, he’s set a record which will take some beating, no matter how long into the future football is played for. Though, they probably said that when Pele set it, too.