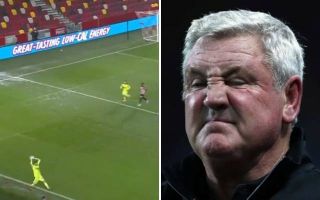 You need not worry about defending when facing Steve Bruce’s Newcastle side – they’ll do your job for you.

That’s what a 23-second clip shared by a concerned Newcastle fan after last night’s defeat to Brentford has brought to the table.

The Magpies faithful have right to believe they’re going in the wrong direction under Bruce, who in all honesty, was a puzzling appointment to begin with.

MORE: These Newcastle fans call for “hot garbage” underperformer to be “released for Christmas”

They were certainly going in the wrong direction last night, having seen their corner kick cleared for a throw-in. Somehow, someway, it ended up back with the goalkeeper after just one kick of the ball.

Under pressure, we step in and clear it for them. #NUFC pic.twitter.com/nKlLwmsDaU

This level of negativity while facing a second-tier side in a cup competition is, quite frankly, inexcusable. You have to think that the fans will not stand for it if it continues like this.

Newcastle are a great club with a vast and passionate fan base. We find ourselves saying this all to often, but they deserve so much better.