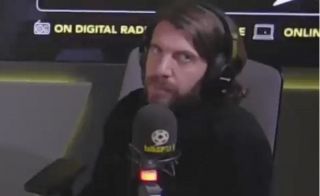 Tis the season to be jolly, apparently, but one parent clearly didn’t get that particular message.

Calling into talkSPORT radio’s ‘The Sports Bar’ programme, a gentleman identified only as Chris told hosts Andy Goldstein and Jason Cundy that he was refusing to buy his children Arsenal kits this Christmas.

Suggesting that there were no heroes on the pitch for the Gunners anymore, Chris’ modus operandi appeared to be that unless Arsenal improved, there would be no purchasing of the famous red and white shirt.

? “There are no heroes on the pitch [for Arsenal] anymore.”

?? “My son asked for an Arsenal shirt for Christmas, I said no.”

? “My kids asked what kit they could get & I said Chelsea! Embarrassing!”

This #Arsenal fan refuses to buy his kids Gunners shirts until they improve! pic.twitter.com/P0qniPiFoN