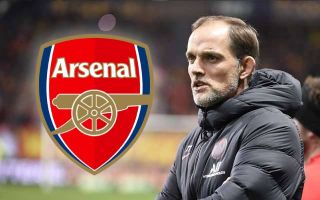 According to Christian Falk, who broke the news about PSG dismissing Thomas Tuchel, the German manager is keen on taking a job in the Premier League.

Few would deny Tuchel’s credentials as a manager, but PSG are always going to be left wanting more, especially having got so close to winning the Champions League and falling at the final hurdle.

It comes as no surprise that he has been given his marching orders, with the French champions struggling to get a grip on the title race at the top of Ligue 1.

Christian Falk, a reliable Bild reporter, has now revealed via Twitter that Tuchel is hoping for a job offer in the Premier League. How long he’ll have to wait for one remains to be seen.

On of the best German Coaches is free for a new challenge – and Thomas Tuchel is interested in the next step: Premier League @ManUtd @Arsenal

What has to be noted is how suitable he appears to be for Arsenal. With Mikel Arteta struggling at the Emirates, Tuchel’s newly found availability will do him no favours in his efforts to keep his job.

That’s what these fans think, anyway. Those on Twitter were quick to link Tuchel with the managerial position at Arsenal, which has only been occupied by Arteta for just over a year.

Never lost a Home game at Bvb for 2 season’s ..

Thomas Tuchel has been sacked by PSG. (BILD)

Would you take him at the Emirates? ? pic.twitter.com/SB0uQ1yNVt

Bring tuchel to north london. Arteta can go for that Guendouzi treatment

Pass the name and country test

Arsenal shouldn’t waste time here. Get Thomas Tuchel on the phone and tell Arteta his time is up. Get a move on. Tuchel is a worldclass coach with great man management. He was popular among the PSG dressing room and he knows how to handle star players. #Tuchel #ArtetaOut #Arsenal