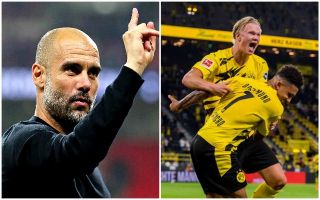 Manchester City have not looked their usual selves so far this season, so could this force them into some big spending in January?

It’s certainly easy to imagine a long list of Christmas presents Pep Guardiola might be pushing the club owners for, and we’ve put a list of potentially realistic targets together today.

One of the best strikers in the world at the moment, there’s no doubt Borussia Dortmund goal machine and recent Golden Boy winner Erling Haaland would add something to this City squad.

The Norway international has recently been linked as a summer target for City by Christian Falk, so it might take some time before we see him at the Etihad Stadium.

True: @ManCity would like to sign Erling Haaland next summer. But: the release at @BVB is only valid from 2022, not in 2021 pic.twitter.com/8bmIFOiS1z

Still, with City struggling and in need of more inspiration up front, could Guardiola push for City to deliver him this early present and get Haaland in in the middle of the season?

After all, if they don’t move quickly, they’re sure to face increased competition for the talented 20-year-old before too long.

Despite bringing in both Nathan Ake and Ruben Dias in the summer, City still look like they’re lacking quality in defence and like they’re struggling to cope since the departure of club legend Vincent Kompany.

Villarreal’s Pau Torres could make sense as a target for MCFC, and was recently linked with them and Arsenal by Spanish outlet Todo Fichajes.

City would do well to win this transfer battle and hopefully give them a lift at the back in the second half of this season.

Finally, City have also been linked with a move for a hugely exciting young player in the form of Bayern Munich midfielder Jamal Musiala.

The 17-year-old has enjoyed a superb start to the season and is now on the radar of several clubs, including City, according to the Daily Mail.

Musiala would undoubtedly be a fine addition to this City squad and could be an important part of rebuilding the club for the future after their recent decline.