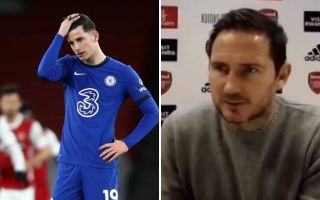 Frank Lampard has revealed his belief that his Chelsea side were, quite frankly, not good enough during their defeat to Arsenal this evening.

Chelsea headed into the fixture as firm favourites, with it being considered another tricky fixture in an unforgiving run for Mikel Arteta’s men.

However, the home side ran away with the three points, with the full-time score-line being 3-1 to Arsenal and Chelsea being left scratching their heads.

MORE: What Cesar Azpilicueta shouted at Arsenal players from the stands during Chelsea’s defeat

Lampard, whose responsibility it is win or lose, and there’s no club in the Premier League more likely to hold him to account in that sense than Chelsea, has given his take on the game.

Speaking to the media post-match, a disappointed Lampard admitted that Chelsea were simply not good enough, bemoaning the Blues’ poor performance on the night.

That’s the message from Frank Lampard after Chelsea’s 3-1 defeat to Arsenal this evening. #CFC #AFC pic.twitter.com/jOZNAgFulT

Chelsea host Aston Villa at Stamford Bridge on Monday night. Lampard will no doubt be dearly hoping that his side can bounce back with a victory.

There’s only so many times you can bounce back, though. If Chelsea want to be genuine challengers this term, consistency is key.