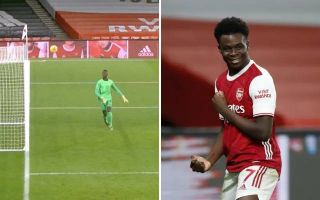 Arsenal youngster Bukayo Saka took to Twitter to confirm that his incredible goal against Chelsea this evening WAS intentional. Of course it was, Bukayo!

Saka has been one of the few positives in what has been a torrid season so far for Arsenal. Testament to how good he has been for the Gunners is his call-up for the England National Team.

The 19-year-old produced another moment to remember during today’s unlikely 3-1 triumph over rivals Chelsea, who have stumbled of late after previously establishing themselves as title challengers.

Saka looked as though he was going to deliver a cross into the box, with the ball somehow looping over goalkeeper Edouard Mendy and in off the post.

It looked as though the teenager was fortunate to have found the back of the net, he has taken to Twitter to claim that is was intentional, in which case it would have to go down as a great goal.

Do you believe him?

Saw him off his line !?? pic.twitter.com/wxxyNkSfe9