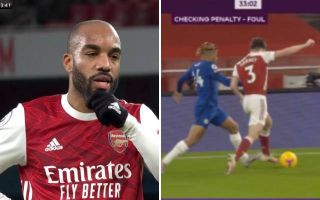 Arsenal have taken the lead over Chelsea at the Emirates, with Alexandre Lacazette firing home from the penalty spot.

The Gunners headed into this game in 15th place, being serious underdogs to get a result against Chelsea, who could go second in the Premier League table with a win.

Arsenal were the better team throughout the course of the first-half against Chelsea – and got their reward, with Reece James bringing down Kieran Tierney in the penalty area.

There was minimal contact, but VAR did not adjudge it to be a clear and obvious error. The penalty was subsequently awarded, with Lacazette making no mistake.

The Frenchman calmly sends Edouard Mendy the wrong way from the spot to give Arsenal the lead at the Emirates! ?

Without Pierre-Emerick Aubameyang on the field, Lacazette took responsibility for taking the penalty, in a team shot of confidence, and delivered from 12-yards.

He deserves great credit for that, as does Kieran Tierney, who managed to convinced the match officials and VAR to award a penalty for what was pretty clearly not a foul.