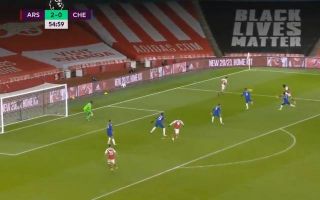 Arsenal have added a third goal during their clash with Chelsea at the Emirates this evening.

The Gunners, 15th place heading into the game, were huge underdogs, but headed in at half-time two goals to the good.

On the balance of the half, it was much deserved, but you expected Chelsea to respond in the second period, especially after Frank Lampard made two changes at the break.

While the Blues did enjoy the majority of possession in the opening ten minutes of the second-half, they couldn’t prevent Bukayo Saka from scoring a third.

Was it a cross? Was it a shot? Saka won’t care, and neither will Mikel Arteta, with the ball looping over Edouard Mendy, onto the post and into the back of the net.

That all but secures an important three points for Arsenal, but what an awful performance this has been from Chelsea. Of great concern to Lampard, no doubt.