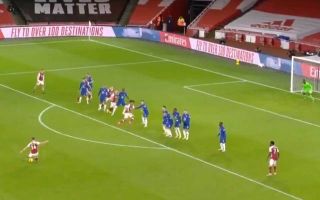 Arsenal are leading Chelsea 2-0 at the Emirates, with Granit Xhaka scoring a sumptuous free-kick from range.

Chelsea could have gone into second place with a win today in North London, with Arsenal in a battle of their own at the other end of the Premier League table.

Mikel Arteta, especially with the players missing today, couldn’t have believed that his side would have Chelsea’s number in the first-half of this contest – but they absolutely have.

Chelsea threatened Bernd Leno’s goal infrequently, with Arsenal creating the better chances, and getting their reward after Alexandre Lacazette scored from the penalty spot.

They weren’t done there, though. Granit Xhaka, who has been criticised plenty over recent weeks and months, stood over the ball after Arsenal were given a free-kick.

Granit Xhaka leaves Edouard Mendy with absolutely no chance as he curls a superb free-kick into the top corner! ?

Xhaka released a thumping effort into the top-corner of the goal, with Edouard Mendy being beaten at full-stretch, and found the back of the net.

What a goal from Xhaka – and what a night this is proving to be for Arsenal!