Marcos Alonso has fallen out of favour with Frank Lampard – and he also appears intent on ruffling Chelsea fans’ feathers too.

Alonso, for all his qualities going forward, has never been considered a particularly good defender. His shaky performance during the 3-3 draw to West Brom, during which he was hauled off at half-time, appeared to be the final straw for Frank Lampard.

The Spaniard has scarcely been seen since, with Ben Chilwell occupying that role, with both Cesar Azpilicueta and Emerson Palmieri able to deputise in his absence.

MORE: “Wasn’t giving us enough” – Lampard says he plans to talk to Chelsea star after poor performance vs Arsenal

As a result, Alonso is widely expected to depart Chelsea as soon as someone comes knocking, especially with the European Championships next summer and the former Fiorentina wing-back having an outside chance of making Luis Enrique’s squad.

His feelings towards Chelsea, with whom he won the Premier League title appear to have soured during his time away from the pitch, or so it seems.

Chelsea were defeated 3-1 by Arsenal at the Emirates yesterday, with Alonso risking the wrath of the Blues faithful by liking the club’s post in wake of the loss.

Considering it’s already been spotted by Reddit user u/ChumbaWambah, you get the feeling there’s going to be a few unhappy Chelsea fans… 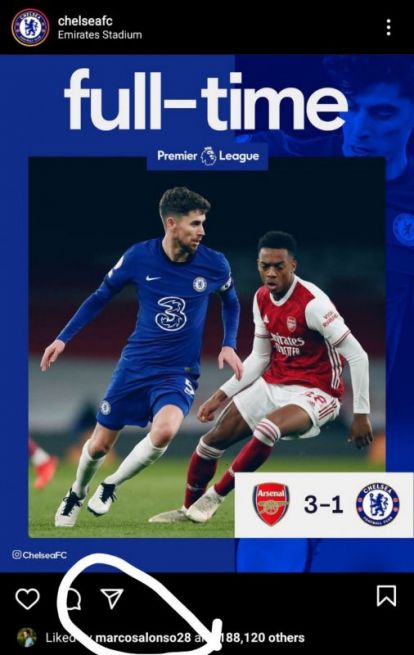