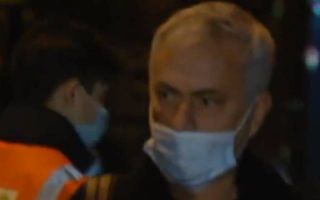 Jose Mourinho was spotted wearing his face mask incorrectly as he headed into Molineux ahead of Tottenham’s clash with Wolves this evening.

Call it pedantic, call it whatever you want, but if you’re going to wear a face mask, Jose, at least bother wearing it how you’re supposed to.

In a short clip posted by the Tottenham twitter account of the players arriving at Wolves, Mourinho and his players are seen heading off the bus and towards the stadium.

All of the players in the video are seen wearing their face masks in the correct fashion, with the mouth and nose being covered to lessen the risk of transmission.

Mourinho, though, had his face mask below his nose, rendering it useless. You can see him within the first five seconds of the video below.

Is this the message that Mourinho really wants to be sending to Tottenham fans around the world?