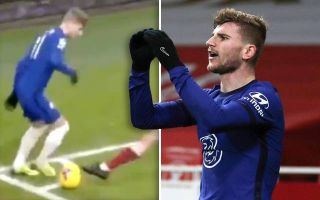 It’s safe to say that Timo Werner isn’t in the best run of form right now – and his first-touch during the defeat to Arsenal was a little on the loose side.

Sky Sports reported at the time of the deal that Chelsea had parted with £45M in order to activate Werner’s release clause and sign him from RB Leipzig.

Despite showing flashes of brilliance initially, after ten games without a goal, Chelsea must be beginning to wonder whether that was a good use of their cash.

Werner has been unable to apply the finishing touch of late, with his finishing being wayward, but by the look of things, it’s his touch in all contexts that he’s struggling with.

Have a look at this passage of play from Chelsea’s 3-1 defeat to Arsenal at the Emirates yesterday, with Werner repeatedly struggling to get the ball under control.

Is this really what you call a £45M first-touch?

How’s his touch this bad I don’t get it pic.twitter.com/e5d6m64M1Z