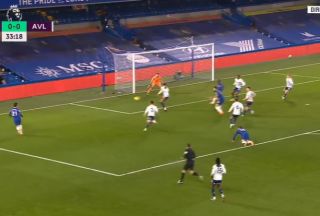 It was only a few weeks ago when Olivier Giroud appeared destined for a January exit after minimal playing time, but he’s suddenly emerged as one of Chelsea’s most reliable goal-scorers this season.

He’s opened the scoring against Aston Villa tonight with a nice header after a lovely flowing move from Chelsea:

There are a few players involved in the build up but Ben Chillwell also deserves credit for his cross which puts the ball right on the Frenchman’s head, while it’s a goal that Frank Lampard really needed after the loss to Arsenal.