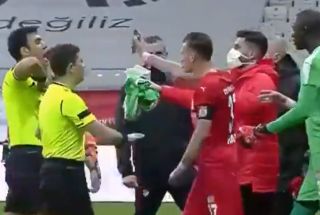 It must be a rough feeling to be the referee and know you’ve made a mistake in a game, but they probably need to act confident and officious as they leave the field.

The ref from the Besiktas vs Sivasspor tried his best to act calm after their game today, but it must’ve been tough when he’s got an angry player forcing a mobile in his face with a replay for him to watch:

It’s one of those moments where you understand the frustration from the player but the ref can’t exactly change his mind, but the combined replay and booting the dugout certainly got his message across.