Daily Mail reporter Dominic King has not ruled out the possibility of Liverpool signing a centre-back in January. Though, any potential deal would have to be on a permanent basis.

Twitter, once a social media platform, has transformed into a legitimate source of daily news for many.

If you’re looking to get your daily fix of transfer gossip, especially at this time of year, there’s scarcely a better place to look than on your Twitter timeline.

From time to time, nuggets of transfer information are provided inadvertently, as has been the case here with Dominic King angrily replying to a Liverpool fan account.

After it was misreported that King ruled out Liverpool signing a centre-back in January, he gave a frank reply – clarifying that the Reds will only not make loan signings in the winter window. 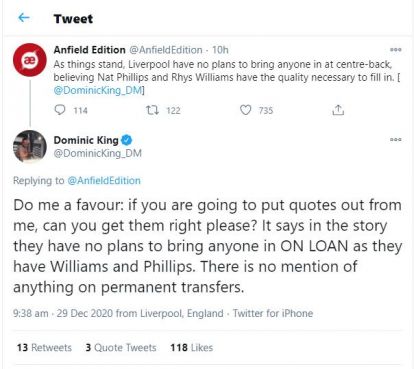 That leaves the door open for Liverpool to sign a centre-back on a permanent basis, which doesn’t seem like such a bad idea, with Virgil Van Dijk and Joe Gomez out long-term and Joel Matip seriously injury prone.

Whether or not it is in Jurgen Klopp’s plans to make a permanent defensive acquisition next month remains to be seen, but King, who knows his stuff with it comes to Liverpool news, doesn’t rule it out.